Joseph Smith and the Gold Plates 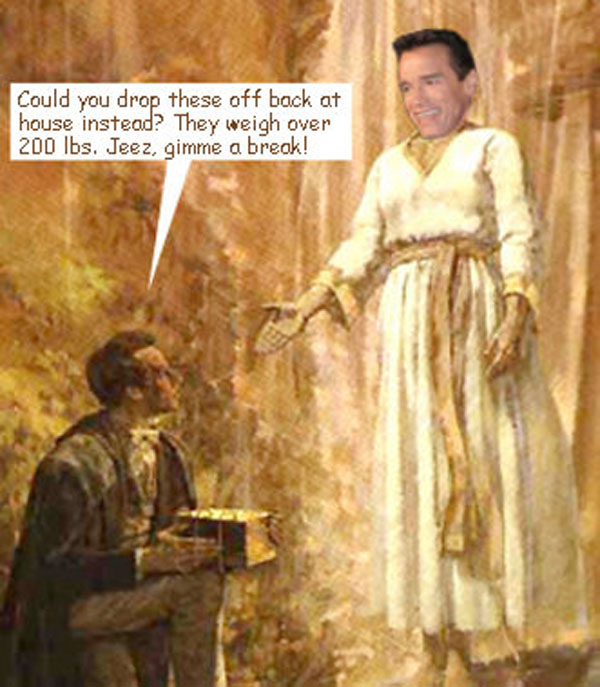 Joseph Smith, the prophet and founder of the Church of Jesus Christ of Latter-day Saints (Mormons) tells us that the Book of Mormon was translated from some golden plates shown to him by a heavenly messenger on September 21, 1823.

"While I was thus in the act of calling upon God I discovered a light appearing in the room which continued to increase until the room was lighter than at noonday, when immediately a personage appeared at my bedside standing in the air for his feet did not touch the floor...When I first looked upon him I was afraid, but the fear soon left me. He called me by name, and said unto me that he was a messenger sent from the presence of God to me, and that his name was Nephi. (1) That God had a work for me to do, and that my name should be had for good and evil, among all nations, kindreds, and tongues; or that it should be both good and evil spoken of among all people. He said there was a book deposited written upon gold plates, giving an account of the former inhabitants of this continent, and the source from whence they sprang. He also said that the fullness of the everlasting gospel was contained in it, (2) as delivered by the Savior to the ancient inhabitants. Also that there were two stones in silver bows, and these stones fastened to a breastplate constituted what is called the Urim and Thummim, deposited with the plates, and the possession and use of these stones was what constituted seers in ancient or former times, and that God had prepared them for the purpose of translating the book." (Times and Seasons, vol. 3, p. 753; Comp.with Pearl of Great Price, p.52)

The plates are shown to Joseph

"Convenient to the village of Manchester, Ontario Co. New York, stands a hill of considerable size, and the most elevated on any in the neighbor hood; on the west side of this hill not far from the top, under a stone on considerable size, lay the plates deposited in a stone box: this stone was thick and rounding in the middle on the upper side, and thinner towards the edges, so that the middle part of it was visible above the ground, but the edge all round was covered with earth. Having removed the earth and obtained a lever which I got fixed under the edge of the stone and with a little exertion raised it up, I looked in and there indeed I beheld the plates, the Urim and Thummim and the Breastplate as stated by the messenger. The box in which they lay was formed by laying stones together in some kind of cement; in the bottom of the box were laid two stones crossways of the box, and on these stones lay the plates and the other things with them. I made an attempt to take them out but was forbidden by the messenger and was again informed that the time for bringing them forth had not yet arrived, neither would until four years from that time." (Times and Seasons, vol. 3, p. 771; Comp. with Pearl of Great Price, p. 54-55)

In a letter to John Wentworth, editor of the Chicago Democrat, Joseph Smith described the plates in some detail:

"These records were engraven on plates which had the appearance of gold, each plate was six inches wide and eight inches long and not quite so thick as common tin. They were filled with engraving, in Egyptian characters and bound together in a volume, as the leaves of a book with three rings running through the whole. The volume was something near six inches in thickness, a part of which was sealed. The characters on the unsealed part were small, and beautifully engraved. The whole book exhibited many marks of antiquity in its construction and much skill in the art of engraving." (Times and Seasons, vol. 3, p. 707, March 1, 1842; Comp. with History of the Church, vol. 4, p. 537)

"At length the time arrived for obtaining the plates, and Urim and Thummim, and the breastplate; on the 22nd day of September, 1827, having went as usual at the end of another year to the place where they were deposited, the same heavenly messenger delivered them up to me, with this charge that I should be responsible for them: that if I should let them go carelessly or through any neglect of mine I should be cut off; but that if I would use all my endeavors to preserve them, until he the messenger should call for them, they should be protected...by the wisdom of God they remained safe in my hands until I had accomplished by them what was required at my hands when according to arrangements the messenger called for them, I delivered them up to him and he has them in his charge until this day." (Times and Seasons, vol. 3, p. 772; Comp. with Pearl of Great Price, p. 55-56)

After removing the plates from the stone box, Joseph hid them in a birch log until preparations could be made at home for the plates. then he went to retrieve them.

"The plates were secreted about three miles from home...Joseph, on coming to them, took them from their secret place, and wrapping them in his linen frock, placed them under his arm and started for home."

After proceeding a short distance, he thought it would be more safe to leave the road and go through the woods. Traveling some distance after he left the road, he came to a large windfall, and as he was jumping over a log, a man sprang up from behind it, and gave him a heavy blow with a gun. Joseph turned around and knocked him down, then ran at the top of his speed. About half a mile further he was attacked again in the same manner as before; he knocked this man down in like manner as the former, and ran on again; and before he reached home he was assaulted the third time. In striking the last one he dislocated his thumb, which, however, he did not notice until he came within sight of the house, when he threw himself down in the corner of the fence in order to recover his breath. As soon as he was able, he arose and came to the house." (Lucy Mack Smith, mother of Joseph Smith, in Biographical Sketches of Joseph Smith the Prophet, 1853, pp. 104-105; Comp. reprinted edition by Bookcraft Publishers in 1956 under the title History of Joseph Smith by His Mother, pp. 107- 108) Emphasis added.

The Weight of the Plates

The weight of the plates makes the story incredible. The heavenly messenger told Joseph Smith that plates were of gold. Joseph described the plates as being 6 inches wide, 8 inches long, and something near 6 inches in thickness. Gold has certain interesting properties. It is a very heavy metal, its specific gravity being 19.3. It is very soft and malleable. Plates made of gold would therefore pack down very tightly when stacked. A little figuring will reveal to the reader that the plates weighed 200.81 pounds or thereabouts!

The base of the monument on the hill in New York where Joseph Smith allegedly found the golden plates depicts him kneeling and receiving the 200 pound plates from the heavenly messenger with outstretched arms. Quite a physical feat!

Imagine Joseph Smith wrapping his linen shirt around this 200 pound block of gold plates, tucking it casually under his arm and strolling off towards home, some three miles distance! Imagine him further, running at the top of his speed through the woods, jumping over logs, and knocking down not one or two, but three assailants in the process, all the while with the 200 pounds of gold plates safely under his arm! If anyone would care to experiment, lead is the nearest common metal to gold in weight, its specific gravity being 11.35. Try tucking a 200 pound block of lead under your arm, and running and leaping through the woods with it for three miles! Then ask yourself: Can I believe Joseph Smith's Story?

Joseph Smith made the ludicrous mistake because he was dealing with imaginary gold. While real gold is very heavy, imaginary gold weighs nothing at all. And that is what Joseph Smith's golden plates were -- imaginary.

1 - In later versions of this account the heavenly messenger's name is changed to Moroni.

2 - See list of "everlasting" doctrines that are not contained in the Book of Mormon.

Go to: "Questions for your Priesthood Leader" on this site.